You are here: Home / blog / Becoming part of the Climate Heritage Network

Last week MSDS Marine were proud to become a founder member of the Climate Heritage Network. It’s aims are incredibly important to all of us at MSDS Marine and it offers a real chance for the sector to come together for change. In this blog Phoebe Ronn reviews the launch of the network. 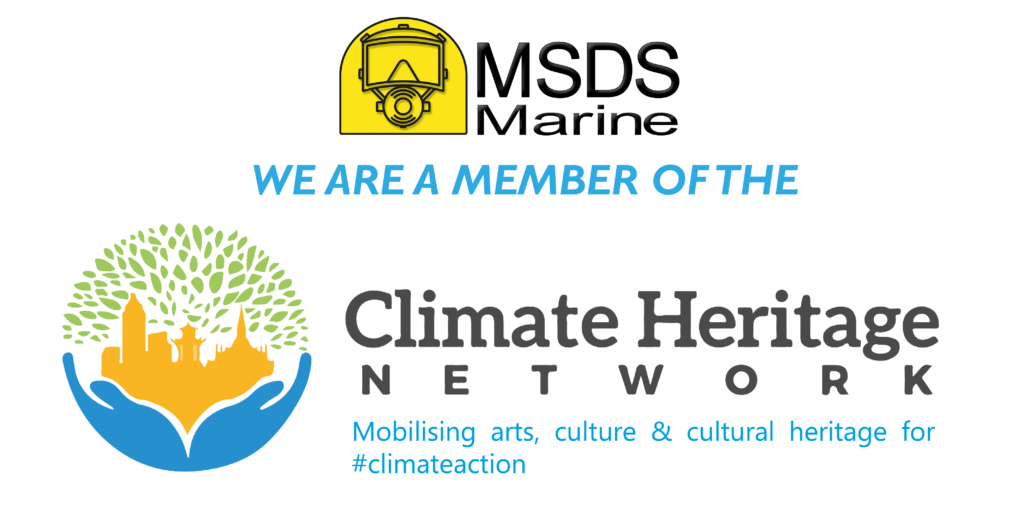 Last week, the Climate Heritage Network was officially launched. Throughout the day, heritage professionals gave talks on a great variety of topics relating to climate change and the heritage sector across four sessions. I was able to watch one of the sessions through the livestream, and participate in the Q&A with the speakers after the talks using Slido.

The third session was titled ‘Cultural heritage tourism (and its impacts) in the era of climate change’, and the speakers discussed how the nature of tourism is changing, how the world is developing, and how this can affect cultural heritage.

Carl Elefante spoke about the carbon emissions of the building industry. He explained that the building stock of the world is expected to double in just decades, a rate that will far exceed carbon emission budgets for the buildings sector. However, Carl’s research suggests that by re-using a building, even by only retaining the concrete or steel frame, the carbon footprint of the construction and operation of that building is reduced by 5.5 times. Carl noted that only 35% of buildings in the UK are traditional buildings, and the rest are from the modern era. I found this statistic shocking- the national identity of the UK is closely tied with its heritage, and so preserving its historic buildings ought to be a priority, especially as this is the most environmentally friendly option: Carl ended his talk stating that the greenest building is the one that is already built.

Cecilie Smith-Christensen stated in her talk that by 2030, international traveller numbers will be at 1.8 billion people per year, which is a 300% increase over the last of 25 years. The expedited construction to support the tourist industry puts immense pressure on heritage sites. Cecilie encouraged a focus on the protection and management of cultural heritage equal to the rate of tourism increase.

Adam Markham’s talk gave examples of how climate change is affecting cultural heritage sites in a multitude of ways: extreme heat-caused wildfires threaten historic and archaeological collections, coastal erosion and sea level rise are destroying 42/49 World Heritage sites adjacent to the Mediterranean, and even extreme rainfall is causing immense damage to fragile structures like the town walls at Pompeii. Adam spoke about how tourist footfall at the Ring of Brodgar, coupled with extreme rainfall, is exacerbating the deterioration of the site, and that it periodically has to be closed. The Lascaux Caves in France are now permanently closed to visitors due to the damage that visitors were doing to the prehistoric paintings within. Climate change is rapidly destroying, or threatening to destroy precious archaeological resources all around the world.

Peter Debrine, of UNESCO, spoke about how tourism is key for the economies of most countries, and many use their cultural heritage as a marketing tool. Unfortunately, as previously discussed, tourism is one of the major factors in the deterioration of heritage sites. Peter suggested that the lack of communication between those who manage tourism and those who manage heritage was a contributing factor to the mismanagement of tourists at heritage sites. Peter made it clear that without collaborative effort, the tourist industry will destroy these heritage sites irreparably. Collaboration was one of the key themes of the whole Climate Heritage Network launch, every speaker advocated working together to tackle the issue of climate change.

Arunima Malik’s talk briefly presented a study on the carbon footprint of tourism. The statistics indicate that despite efforts to lower the emissions of the tourist industry, the rate of tourism is significantly outstripping these efforts. It seems that slowing the growth of the industry is the best way to reduce its carbon footprint.

While all the talks seemed to present doom and gloom; describing an almost unstoppable force that is destroying cultural heritage at an alarming rate, raising awareness of the threat that climate change poses is one of the core aims of the Climate Heritage Network. The study of the effects of climate changes on cultural heritage educates the global effort to help this resource adapt. Creating opportunities for discussion allows progress to be made. The Climate Heritage Network will hopefully unite heritage agencies and companies in the fight against climate change, and encourage the sector to reduce its carbon emissions, setting an example for all other global sectors. We are delighted to be a part of this!